This is a picture I did as a style guide for an animated sting for work, but the sting is now going to be much more "graphical" in nature, will post it up once it's done. It should be quite nice! 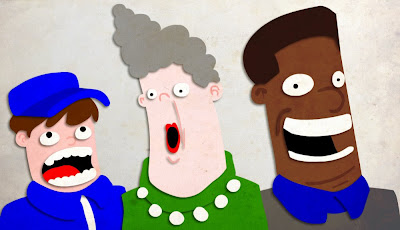 I'll stop using thing/things in my post subjects from now on, promise!

Posted by Michael at Friday, February 27, 2009 No comments: Links to this post

Two illustrations I've had published in the rather excellent Sci-Fi and Horror anthology, Murky Depths.

The first one was in the first issue, and to be honest isn't my finest hour as an illustrator, the second (from issue five) is much stronger though I think, and was a good project for getting to grips with my lovely Wacom tablet :o) 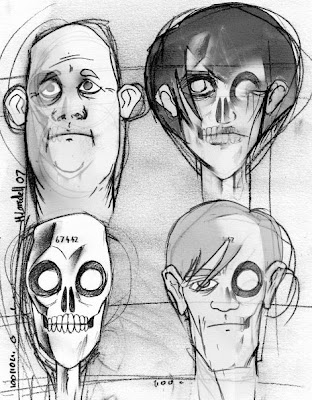 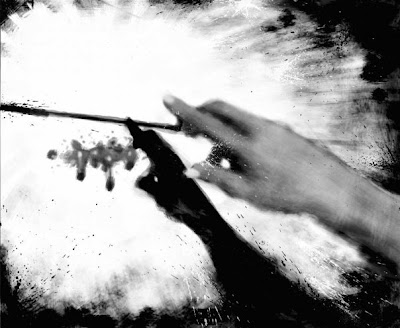 I thought I'd post a link to an internet site I made last year for BBC Scotland;

I made the artwork, animations, etc and a talented colleague did all the very clever Action Script stuff. The text and some of the details seems to of changed slightly somewhere between it being sent off to the BBC and the website going live, I assume it's a programming thing so until I learn a bit more about that you shall have to except that the finished version I made was a bit neater! I've made one other flash website, but it isn't publicly accessible, which is yet another educational thing! And, I thought I'd upload a set of icons made in flash that were designed for another BBC website, but one where the Beeb was so taken with the concept that they're remaking it so as to be integrated into the site proper, or so I believe... Anyway, here are the (now defunct) icons:

Posted by Michael at Wednesday, February 18, 2009 No comments: Links to this post

These are three little video stings I made for a set of educational films that never saw the light of day. Because the films were never finished the animations only exist in the rough form that I'm putting up here, but are kinda fun and you may enjoy them.

As the video quality is pretty sucky, I've just uploaded the one for now, I need to figure out a decent solution to this for the future, as a lot of the stuff I'd like to upload is video based.

I've also added advertising to my blog, mostly as I'm curious as to how it works. Mostly it just seems to be adverts to get rid of bad breath, I'm not sure how keen on that I am really. If they don't get better then I'll get rid of them, but the idea it could make me money is nice. If very, very unlikely! Someone would have to actually be looking at the blog first of all...

Posted by Michael at Wednesday, February 18, 2009 No comments: Links to this post

I'm running storyboarding and colour grading workshops for a Bristol charity called Integrate in March and May (? not sure about the second lot of dates, yet) at the Bristol Academy. Some of the Somalian students there will be working with us to make the first ever Somalian film made in the UK, we are just going to show them how to use the equipment, etc and then the actual process of making the film will be done by the kids. It should be pretty cool, and hopefully I'll egt some nice pictures of it all happening to put up on here. It doesn't have an internet presence as such, but the crews blog is here:

Posted by Michael at Tuesday, February 17, 2009 No comments: Links to this post

A couple of pieces to do with my lovely girlfriend, Susan. The first is a few of a series of sketches I produced quickly for a brochure she was tasked to make, for students and parents, about exam revision. Riveting stuff! Which is why I did these, to enliven things from the usual generic clip art that these things tend to contain. Anyway, it's no masterpiece, but here are the pictures:

This next picture is a series I did for Susan's birthday. On the left is a slightly touched up sketch (originally done on a post-it note, but as this is now stuck to the back of the final canvas and I've lost the original scan, it's the closest to a starting point I have available to show), in the middle is a computer coloured version of it, from which I used the black layer to create a stencil that I used to make the final piece on the right. It's a really bad photo though, the real thing looks a bit better...

Posted by Michael at Tuesday, February 17, 2009 No comments: Links to this post

My day job involves working as an editor on TTV, both in an offline (chopping up the footage and making it into a programme) and online (creating a broadcast-able version, and colour-correction too, as the company I work at is quite small) capacity. Anyway, I tend to encourage the use of graphics in the programmes we make to enliven both the programmes and my job, so I thought I'd upload some pics to do with that, and then some video clips in the future, maybe. So the first thing is this comic cover I designed for a programme to help kids learn French. As we can't use copyrighted things without paying lots of money I got to spend a few hours designing this. It's a bit rough but I liked the look of the final thing. I very rarely colour my pics, so it's nice to see something in a style I would choose to use in a state more finished than say, scribbled on a post-it note. 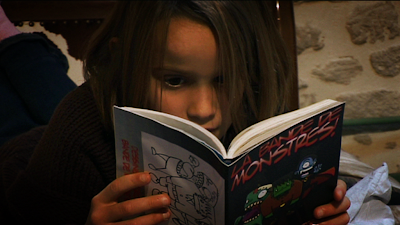 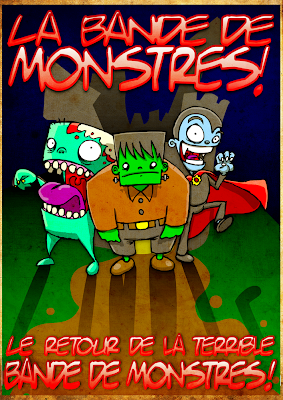 I did some "special effects" (they were well special!) for the programme too, for instance, these magically appearing geese: 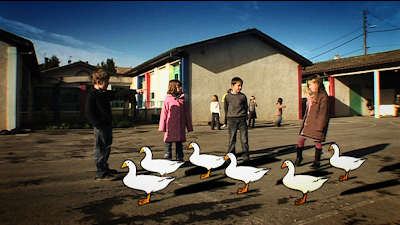 After this, the girl on the left morphs into a giant goose. I kid you not... It's probably as amazing as the first time you watched Stargate, or something.

Okay, to finish up, here are some stills from a TTV project that never really got off the ground; 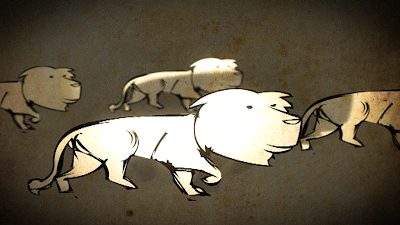 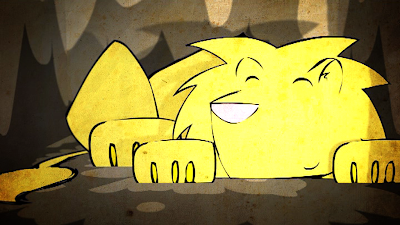 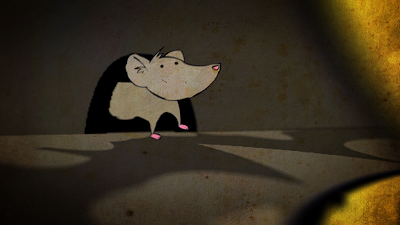 I was working on an animated version of the Aesop fable, The Lion and the Mouse. It would of taken too long though, and so will never be. Booo!

Posted by Michael at Monday, February 09, 2009 No comments: Links to this post

Michael
Bristol, United Kingdom
I make visual things, in as many ways as I can think of, and I like to have them available for others to see. I'm nice like that.